and#039;This Is Why I Do The Joband#039;: Firefighter Cradles Baby After Car Accident

‘This Is Why I Do The Job’: Firefighter Cradles Baby After Car Accident


A photo of a Chattanooga firefighter cradling a baby involved in a car accident is touching hearts across the country. 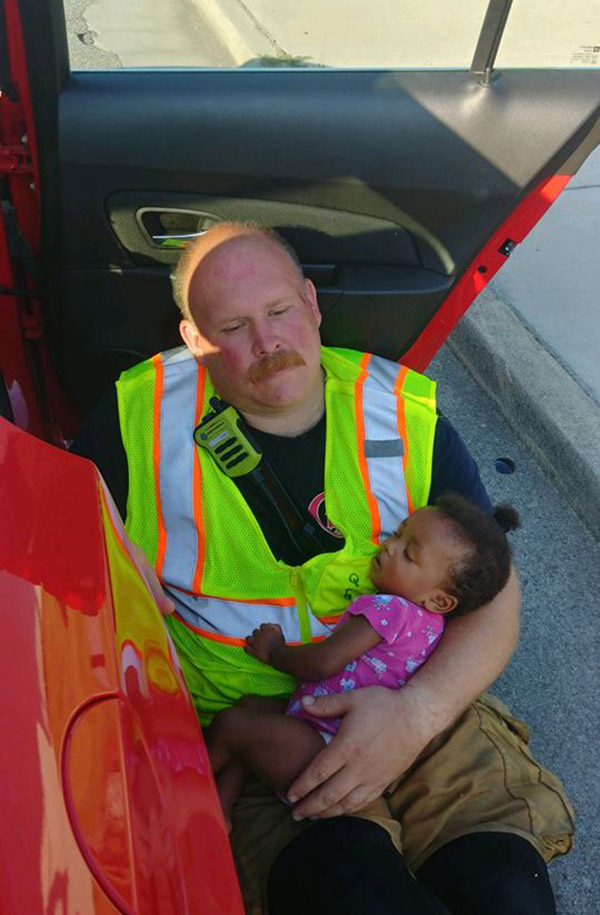 
On Saturday, Captain Chris Blazek of the Chattanooga Fire Department in Tennessee responded to a car accident involving a pregnant woman, who was driving with her three young children in the back seat.


“After getting back to the hall from a house fire last Saturday in 4’s district (I was literally in the shower), Engine 6 was dispatched to a car incident on Highway 58. The incident included the driver — a pregnant mother — and her three small children who were in the back seat. The mother was hysterical because she was having abdominal and back pain. The children ranged in age from 7 years to 4 months. Both big girls were fine, but the baby was screaming hysterically too.


So I took her out of her car seat and did a quick physical exam to make sure she was okay. She immediately laid her head on my shoulder. Shortly after that I decided that my guys had the scene under control, so I decided to sit and take a break with my new friend. She immediately fell asleep in my arms. Mom was transported and Engine 6 personnel stayed on scene with the children until they were turned over to family members. It’s moments like this, that I am reminded, this is why I do the job.”


The picture has garnered hundreds of comments praising Blazek, including one from the mother involved in the accident, Whittley Hightower.


“I really want to say thank you for being there for my three girls,” she wrote. “It was such a scary moment for all of us. God bless you.”

A Chef Had His Bike Stolen During A Shift. A Stranger Replaced It