When announcing his split from Melinda Gates, the Microsoft co-founder and philanthropist assures that he and his now-estranged wife ‘will continue [their] work’ at their foundation.

AceShowbiz –
Bill Gates and his wife are going separate ways. After 27 years of marriage, the Microsoft co-founder and Melinda Gates announced in a joint statement that they have decided to get divorced.

The pair broke the shocking news via Twitter on Monday, May 3. “After a great deal of thought and a lot of work on our relationship, we have made the decision to end our marriage. Over the last 27 years, we have raised three incredible children and built a foundation that works all over the world to enable all people to lead healthy, productive lives,” they penned, referring to the Bill & Melinda Gates Foundation that they founded in 2000.

“We continue to share a belief in that mission and will continue our work together at the foundation, but we no longer believe we can grow together as a couple in this next phase of our lives,” the philanthropists concluded their statement. “We ask for space and privacy for our family as we begin to navigate this new life.” 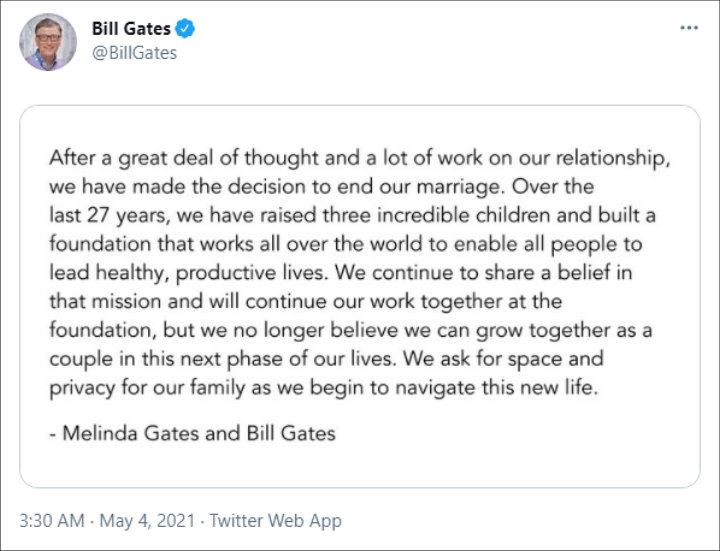 Bill Gates and Melinda Gates called it quits after 27 years of marriage.

A few hours after sharing the announcement, their eldest daughter Jennifer Katharine wrote on Instagram Story, “Hi friends, By now, many of you have heard the news that my parents are separating.” She added, “It’s been a challenging stretch of time for our whole family. I’m still learning how to best support my own process and emotions as well as family members at this time, and am grateful for the space to do so.”

“I won’t personally comment further on anything around the separation, but please know that your kind words and support mean the world to me,” the medical student went on. “Thank you for understanding our desire for privacy while we navigate the next phases of our lives. With love and respect, Jenn xx.” 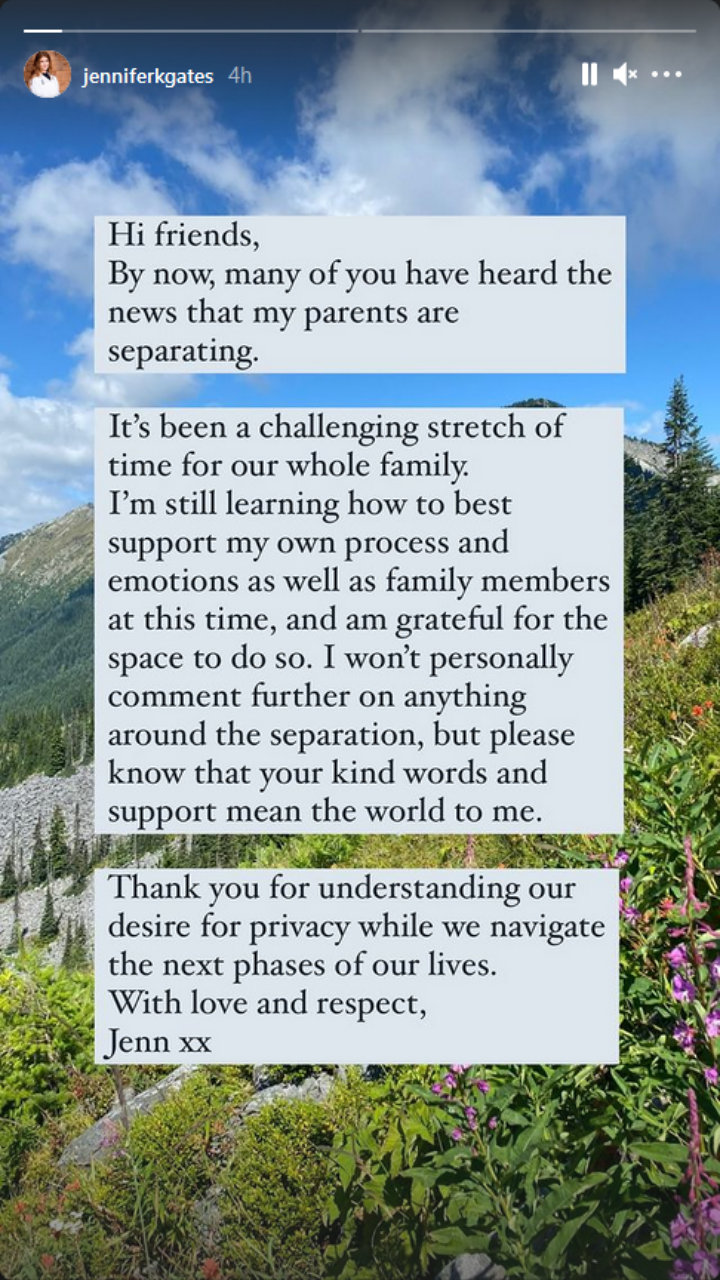 Jennifer Katharine broke her silence on her parents’ divorce.

Bill and Melinda tied the knot on the Hawaiian island of Lanai on January 1, 1994. In addition to 25-year-old Jennifer, they also share 21-year-old son Rory John and 18-year-old daughter Phoebe Adele.

Back in 2017, Bill revealed when he first met his now-estranged wife. In an interview with “CBS Sunday Morning“, he divulged, “I met her at a New York City sales meeting… And then it was only a week or so after that, that I went up to her in the parking lot and asked if she wanted to go out.”