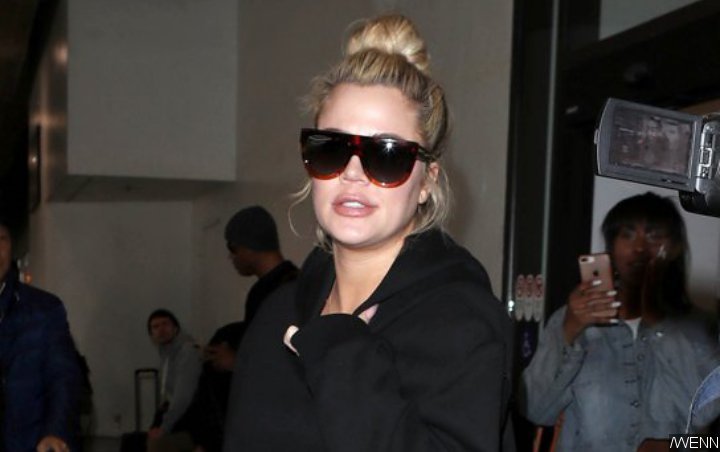 The reality TV star comes to support her boyfriend Tristan Thompson as his team takes on the Golden State Warriors in Game 3 of the NBA Finals.

AceShowbiz –
Khloe Kardashian has made her third public appearance since giving birth to her first daughter True Thompson. The blonde beauty stepped out on Wednesday evening, June 6 to support Tristan Thompson as the Cleveland Cavaliers took on the Golden State Warriors in Game 3 of the NBA Finals.

Keeping a low-profile, the “Revenge Body with Khloe Kardashian” host looked stunning in a pair of ripped jeans and a black print T-shirt, showing off her curves. Her hair fell in straight length over her shoulders. She was all smiles when she emerged from the game while being surrounded by security.

The mother-of-one was surely in a good mood that evening as she even let fans take pictures with her. One picture showed her making a duck face as she leaned towards two fans at the Quicken Loans Arena. One of the fans, Yasmeen Aiston, told Entertainment Tonight that “Khloe was great. Very personable. She waved and blew kisses during the game and stopped for a photo-op afterward.”

Another lucky fan who got to take a picture with the reality star was Sianez Johnson. Her husband, who took their picture, told the news outlet that Khloe was all smiles during their brief meeting and told his wife it was nice to meet her. He added that the Good American founder appeared more than happy to be at the game to cheer on her athlete boyfriend.

My Wife SIANEZ JOHNSON and khloe Kardashian at the game tonight. pic.twitter.com/PqmysDW3Tx

Despite her support, the game ended in a loss for Tristan’s team, giving the Golden State Warriors a 3-0 series lead.

This marks Khloe’s second time supporting the Canadian athlete at a game. Prior to this, she was spotted watching Tristan play on May 6, nearly a month after news broke that he cheated on her with multiple women.